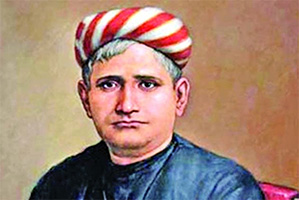 Bankim Chandra Chaterjee Indian National Song – Bankim Chandra Chaterjee penned ‘Vande Mataram’ for his Bengali novel ‘Anand Math’. The song charged with patriotic fervor and full of praises for the motherland was an instant favorite among the freedom fighters of the day. Later, it was translated into English by Shree Auribindo Ghosh to conform to its universality and eventually, the first stanza of the song became the National Song of India.

English
I bow to the Mother,
Richly watered, richly fruited
Cool with the winds of the South,
Dark with the crops of the harvests, The Mother!
In the Glory of the moonlight,
Her nights rejoicing,
Her trees in flowering bloom,
Her hands clothed beautifully
Sweet of laughter,
Sweet of speech
Giver of boons, giver of Bliss, The Mother!

The song was a source of inspiration for many patriots and owes as much respect by the Indians as the National Anthem – ‘Jana Gana Man’. It was first sung in the 1896 session of the Indian National Congress.